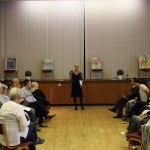 On Sunday 14th September, BBC Woman’s Hour Producer Lucinda Montefiore spoke at a Hampstead Synagogue brunch exploring the subject of mindfulness. The talk was called ‘Change the way you think, feel and act.’  Lucinda, who is from North London and has been practicing mindfulness for many years, spoke about its benefits, origins, and gave some practical ways in which it can be used every day to help manage our ‘wandering minds.’

The brunch was well attended by over 70 people of all ages, including members of the community, young people in the area and a guest appearance from local resident and broadcaster, Dame Jenni Murray DBE.

During the event, Lucinda took attendees though a short meditation and helped them to realise the potential of being mindful through an eating exercise. Lucinda, who has produced other radio 4 programmes including The Learning Curve and All in the Mind, recently launched a series on Radio 4 Woman’s Hour,  ‘Staying Sane: Healthy Minds in a mad world’, about using mindfulness to manage a healthy mind.  In January she starts training as a mindfulness teacher.  Speaking about the benefits of Mindfulness, she said: “Mindfulness teaches you to notice when you’re on automatic pilot preoccupied with thoughts of past and the future; it helps you to come back to the present moment and experience it more fully.”

Rabbi Michael Harris, of Hampstead Synagogue, said: “It was an engaging and stimulating talk and it resonated very much with traditional Jewish ideas about the mind”.

Synagogue Vice Chair, Vice Chair, Adrienne Powell who also works as an OD Consultant said about the event “I really benefited from being reminded about how Mindfulness has many personal benefits to us in our busy lives. I also found it a wonderful opportunity to de-stress after a hectic week.”

Mindfulness has been endorsed by celebrities such as Goldie Hawn – who discussed it at the Davos conference in February 2014 – and by Ruby Wax, who has sworn to its efficacy in helping with depression and anxiety. However, mindfulness is not just being used in mental health. It has been used by business leaders in the workplace, in politics and in education. Last year over 70 MPs and Peers attended mindfulness classes and events in Parliament, and in May an All Party Parliamentary Group on Mindfulness was launched.