The end of an era

As always, the AGM looked back on the community’s successes, and looked forward to the next year. The Chairman’s report, delivered by Michael Haringman, emphasised just how much Hampstead has achieved – even limiting the report to the major highlights meant reviewing no less than forty different items! Highlights included:

Madeleine Abramson ( our Financial Representative) gave a report on our finances, Amanda Ruback reported on the Board of Deputies (including  the recent elections) while Josh Zaitschek reported on a highly successful year for our 20s and 30s, including sell-out Friday night dinners and the justly renowned Den and Junior Den. 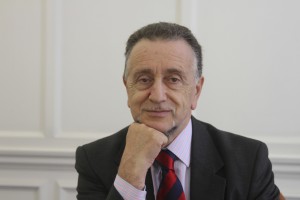 This year however was a very special AGM, marking as it did the end of Michael Haringman’s amazing 18-year service as Chairman of Hampstead. Rabbi Harris spoke for the entire community:

At this AGM Michael Haringman is standing down as Chair after 18 years of magnificent service to our community. All though there will please G-d be further and fuller opportunities to pay tribute to his work for our Shul I did not want Michael’s term of office to come to a formal close this evening without publicly expressing my deep thanks to him for everything he has done for Hampstead.

The beautifully renovated main Shul building that we now enjoy and which attracts the admiration and sometimes the wonder of visitors is perhaps the most visible element of Michael’s legacy as Chairman.  It was he who drove and masterminded the project, showing incredible dedication, determination and persistence over a decade of fundraising, planning and building. I well remember the times when one difficulty or another with the project seemed insurmountable, but Michael found a way through them all. The result is a Synagogue chamber which we sometimes slip into taking for granted but which is undoubtedly one of the most beautiful in the entire Jewish world. Of course other people donated most generously of their time, money or both in attaining this magnificent goal. But above all, it is Michael’s achievement.

Much else has developed a great deal over Michael’s term of office. When Michael came into the “box” in 1997 and I was the very new rabbi of the Shul, our services and style were very formal and many would argue somewhat dated.  Inevitably, Michael and I did not always agree about the detail and timing of every change. But we worked together and under Michael’s Chairmanship we evolved at a sensible pace. I believe it is fair to say that Michael’s approach resulted in much positive change achieved over time in a way that took the community with us.

The fact that we have become less formal has not meant a dip in the standards of running Synagogue services, and there again Michael is the central figure. Smoothly running services appear to involve little preparation, but those on the “inside” know that that is not the case at all. Michael’s hard work and attention to detail have immensely enhanced our services and made possible some truly memorable special services and occasions.

So much else could be mentioned: the untold hours that Michael has devoted to all aspects of Shul life; my personal debt of gratitude to him for a long, harmonious and productive working relationship and deep personal friendship; and the United Synagogue award to Michael a couple of years ago recognising him as the outstanding Shul Chair of the entire organisation.

We look forward to Michael’s continued close involvement with our Shul in exciting new ways and projects, thank Barbara for the long loan of her husband, and wish them both and the family every continued success and blessing.

It is hard to sum up the contribution that Michael has made for this community, but, to paraphrase the famous tribute to Sir Christopher Wren: Reader, if you seek his legacy – look around you.

We now look to the future, with our new executive led by Chairman Michael Helfgott, assisted by co-Chair Adrienne Powell, Wardens Tony Ostrin and David du Parc Braham, and Financial Representative Madeleine Abramson. We are also fortunate that Candice Janet will become our full time Community Manager, and that Josh and Yocheved will not only continue their excellent work with 20s-30s, but also extend their role to teens.

With an immediate focus on the complete replacement of the Community Centre, the next phase in our community’s history will begin.