By the time the rain had stopped on Sunday afternoon, the Dennstan Devils,  Hampstead and Dunstan Road’s team, were raring to get one over their local rivals the Shomrei Sharks after a year’s break from the annual cricket derby. 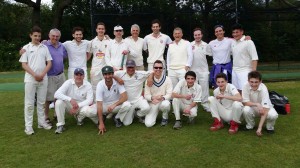 After winning the toss and deciding to bat, two early wickets were lost cheaply. However, we were never going down without a fight.  Hampstead Harrier’s own Freddy Powell steadied the ship, going on to score a wonderful 82 in an innings that will live long in the memory of die-hard Hampstead fans, with some beautiful stroke play and powerful six hitting.  Freddy was ably supported by the sterling batsmen of Dunstan Road, and his brother, Barnaby Powell, coming in at number 7 and scoring a quick fire 44 not out. Together they helped Hampstead reach a mammoth total of 198 off 25 overs in a brilliant batting display on what was undoubtedly a bowlers’ wicket.

The Shomrei Sharks were never going to give us an easy ride.  With their strength lying in their deep batting line-up, they put up a valiant effort.  Hampered by some excellent bowling from our own Benji Ross, Shomrei looked to be well off the pace when they went into bat.  However, despite solid bowling spells from Barnaby and Gabriel Mendel – with Gabriel grabbing two wickets and Barnaby frightening the batsmen with his fierce bouncers – Shomrei accelerated nicely.

Yet, despite a few nerves in the middle overs, the result was never in doubt, with excellent bowling from Dunstan Road bowlers and Hampstead’s own Powell duo picking up wicket after wicket and restricting Shomrei to 175, a Hampstead and Dunstan Road win by 23 runs.

A fantastic effort from all of those involved, including a honourable mention for the stalwart at the top of the order, Rabbi Michael Harris who provided incredible insight and mentoring for young and old players alike.