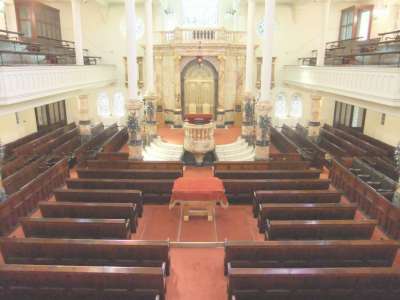 The founders of the Synagogue wanted to break with some of the
traditions of the United Synagogue, which were adopted in other
Synagogues.

These included: omitting the repetition of the Amidoth, abolishing
the ceremony of duchaning (blessings of the priests), reading the Ten
Commandments every Shabbat, reading some of the service in English and
holding a confirmation service for girls.

However the main “innovation” was to hold two services, one at 8.30am and the second at 11.00am commencing from Nishmath.

In 1889, The Chief Rabbi Nathan Marcus Adler, agreed to the second
service starting at 11.00am, but ruled that it must start from Ein
Kamocha. He also insisted that they keep the repetition of the Amidoth
and the duchaning.

This decision led to nine members of the Hampstead Committee, including the honorary secretary, Ernest D. Löwy, resigning.

Herman Adler, the Chief Rabbi’s son, did negotiate with the
Committee in that they would be allowed to make changes, including the
holding of two services. The second service could start at Barechu or
Nishmath, providing it started at 10.00am. This agreement he honoured
when he was appointed as Chief Rabbi in 1892.

In 1903, the two services were merged into one.

Today, the Synagogue holds one service on Shabbat morning, starting
at 9.15am. The tradition of two services is marked by a fifteen minute
break for Kiddush, tea and coffee after the repetition of the Shacharit
Amidah, to which the congregation are invited. After the break, the
service recommences with Ein Kamocha (or Hallel when appropriate).