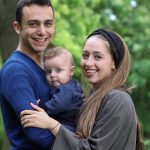 Rabbi Jack Cohen grew up in Mill Hill with firm roots in the local Shul community and Bnei Akiva. He attended City of London school, thoroughly enjoying spending his formative years in the heart of London.

Whilst he should have been studying for his GCSEs he became hooked on philosophy. This passion eventually pushed him to read Philosophy at UCL where he attained his BA.

During his time at university, encouraged by the gentle prompting of a close friend, Jack began regular Talmudic study. Intent on pursuing this further, he decided to spend a year in Yeshivat Har Etzion (“Gush”) to deepen his skillset and broaden his knowledge base. It was on the plane to Israel that the thought of becoming a Rabbi first occurred to him, and once the seed was planted there was no going back.

At Yeshiva, Jack was privileged to study Halacha (Jewish Law) under the tutelage of HaRav Shlomo Levi shlit’a, and to form close ties with several other members of the Rabbinic faculty. He received Smicha (Rabbinic ordination) from HaRav Zalman Nechemia Goldberg zt’l in 2018 and is currently completing a second Smicha under the auspices of Mizrachi Olami.

Jack is married to Rivka who hails from Hendon where she grew up in a large and close-knit family impressing on her the values of warmth and hospitality. Jewish learning has always played a central role in her life, and she attended Midreshet Moriah and Nishmat seminaries where she dealt in depth with Rabbinic texts and thought.

Rivka went on to KCL where she studied Maths and Philosophy for her BA. She is now a fulltime software developer who has worked in the US, Israel, and England. She is currently coding for We Got Pop which provides technology for the TV and film production industry (Star Wars, The Crown, Killing Eve, etc.).

Rivka and Jack, along with their charming son Itzik, join the Rabbinic team at Hampstead with a (non-exclusive) focus on young adults and families.