Meet the Board of Deputies Representatives 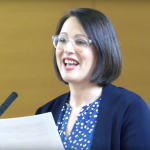 Amanda has lived in North West London all her life and has never lived more than 10 miles from where she was born, in Stanmore – although through her working life, she has travelled to more than 40 countries around the world. Always happiest when she’s busy Amanda’s career has been split between advertising and marketing and working in the field of corporate responsibility and international development with multinational companies and the NGO sector. She was married at Hampstead Synagogue in 1991 and became more involved after her then toddler daughter enjoyed our children’s services so much that she dragged Amanda to shul each week. She has been an active member of the Board of Management for many years and was instrumental in creating our recent Spirit of Hampstead Festival. In 2012 she was voted on to the Board of Deputies as one of our Representatives and has been elected as Vice President for the 2018-2021 triennium where she is responsible for the Defence Division agenda including the defence of Jewish freedoms, rights and security, specifically all forms of antisemitism, racism, anti-Israel extremism and bigotry.

Rachel has been involved in Hampstead Synagogue since 2015, when she moved to the area.  She has participated in the Ladies Megillah Reading for the last 3 years, has volunteered on the security rota, and is looking forward to representing Hampstead as the Board of Deputies Under 35 Observer.

Elsewhere in the community, Rachel has been heavily involved in Limmud since 2011, taking a role on the Conference steering group twice, and is currently supporting the organization in volunteer mentoring and support.  She also recently visited Ukraine with World Jewish Relief, and is becoming involved in fundraising and raising awareness of the charity’s projects in Eastern Europe.

In her day job, Rachel works in Human Resources, focusing on employee relations and business partnering.

We can use all sorts of skills! Just 30 minutes of your time can make all the difference to our community. Speak to Hayley or a Board member now.

NO SERVICES CURRENTLY DUE TO THE CORONAVIRUS RESTRICTIONS