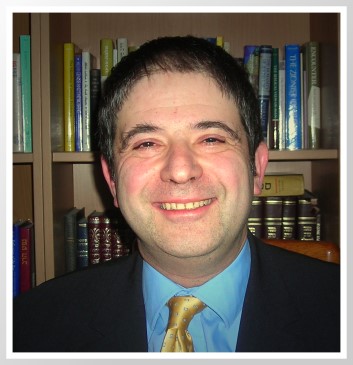 Rabbi Dr Michael Harris was born in London in 1964. He studied at three yeshivot in Israel: Ma’ale Adumim, Machon Harry Fischel and Yeshivat HaMivtar in Efrat. He holds semicha (rabbinic ordination) from the Chief Rabbinate of Israel and from other prominent Israeli rabbis.

Rabbi Harris became Rabbi of the Hampstead Synagogue in 1995, having previously served as Rabbi of the Southend and Westcliff Hebrew Congregation for three years. His first full-time communal position was as Education Officer of the Union of Jewish Students in 1986-87.

He is currently studying part-time on the Dayanut course in family law run by the Eretz Hemdah Institute of Jerusalem and the Montefiore College in London.

Rabbi Harris obtained his first degree in philosophy from Cambridge University, subsequently going on to receive a Masters in the same subject from the Hebrew University of Jerusalem. In 2001 he received his Ph.D in philosophy from the School of Oriental and African Studies, University of London. His first book, Divine Command Ethics: Jewish and Christian Perspectives was published in 2003 by Routledge. He co-edited, with Daniel Rynhold and Tamra Wright, Radical Responsibility: Celebrating the Thought of Chief Rabbi Lord Jonathan Sacks (Maggid Books 2012), a collection of essays by leading thinkers which was formally presented to Rabbi Sacks z’l at our Shul on his retirement from the Chief Rabbinate .

Rabbi Harris has published articles in scholarly journals including the Harvard Theological Review and the Torah U-Madda Journal, as well as articles in newspapers including the Guardian and the Jewish Chronicle. He has taught on BA and MA programmes at King’s College, London, and is formerly an Affiliated Lecturer in the Faculty of Divinity, University of Cambridge. He is a Senior Research Fellow at the London School of Jewish Studies (LSJS).

Rabbi Harris is a regular speaker at the annual Limmud Festival and has lectured in many synagogues, at JW3, and at other venues within the UK Jewish community and abroad.

When unable to find sufficient aggravation within the Anglo-Jewish community, Rabbi Harris seeks it in his capacity as a proud, card-carrying member of Chelsea Football Club.

The latest from the rabbi… Follow this link http://hampsteadshul.wordpress.com/