It was standing room only at the launch of Rabbi Dr. Michael Harris’ new book, “Faith without Fear: Unresolved Issues in Modern Orthodoxy”, held in the Community Centre of Hampstead Shul on Monday 19th October, 2015.

Over 200 people packed out the hall to hear a panel discussion on the new book. The panel, chaired by Dr Anthony Julius of Mishcon de Reya and comprising Rabbi Harris, Dr Tamra Wright, the Director of Academic Studies at the London School of Jewish Studies and Dr Simon Hochhauser, former President of the United Synagogue, engaged in a lively and fascinating discussion and took questions from the eager audience.

The book was summarised by Rabbi Harris as examining key unresolved issues in the Modern Orthodoxworld, but not a book for those seeking easy or neat responses. He explained that it was his first attempt to write for a non-academic audience, and hoped that the intellectual style was accessible to the lay reader. Rabbi Harris explained the title “Faith without Fear” referred to three areas where Modern Orthodoxy needs to be fearless -fearless in self-confidence, and discarding the “inferiority-complex” that has developed in Modern Orthodoxy in the face of Charedi Orthodoxy; fearless in tackling key issues head on, for example the “Torah from Heaven” debate, the reclamation of mysticism and also in acknowledging the changing roles and rights of women in Modern Orthodoxy; and finally, fearless in giving precedence to one strand of Judaism, again linked to the issue of self-confidence.

Questions were then posed to the panel on themes highlighted in the book, first from Dr Julius, and then from the audience. Among many issues, Dr Hochhauser spoke about the increasing trend of Rabbinic authority over matters outside halacha and the dangers of the United Synagogue failing to engage with outside debate. He agreed with Rabbi Harris that the United Synagogue is behind in addressing the role of women in Modern Orthodoxy, noting that it took years of hard work toconvince the Rabbinic authorities to allow women as Trustees. He also touched upon the controversial topic of the moment – partnership minyans. Dr Wright answered questions on the divisions between approaches to Judaism and expounded upon how the richness and diversity https://www.cialissansordonnancefr24.com/ within Jewish thought offered a response to the different challenges Judaism faces. Rabbi Harris also fielded questions on the Askenazic character of Modern Orthodoxy and lack of similar divisions in Sephardi tradition, on challenges to the idea of “Torah from Heaven” (noting the issue was less the Documentary Hypothesis and more addressing recent discoveries of written content pre-dating but similar to the Torah),  the challenges faced with training new Modern Orthodox Rabbis and the disparities between Charedi and Modern Orthodoxy. 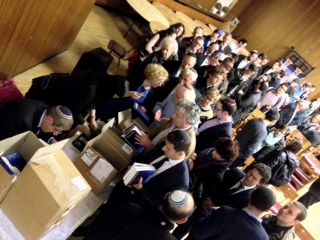 e panel discussion gave a current and unique view of the state of Modern Orthodoxy and the challenges individuals and institutions face within Judaism. Rabbi Harris explained just enough to entice the audience to buy his book and find out more (the long queues at the end of the evening certainly proved its appeal!), but also posed many important questions that the wider Jewish Community and the authorities that support them need to address themselves.